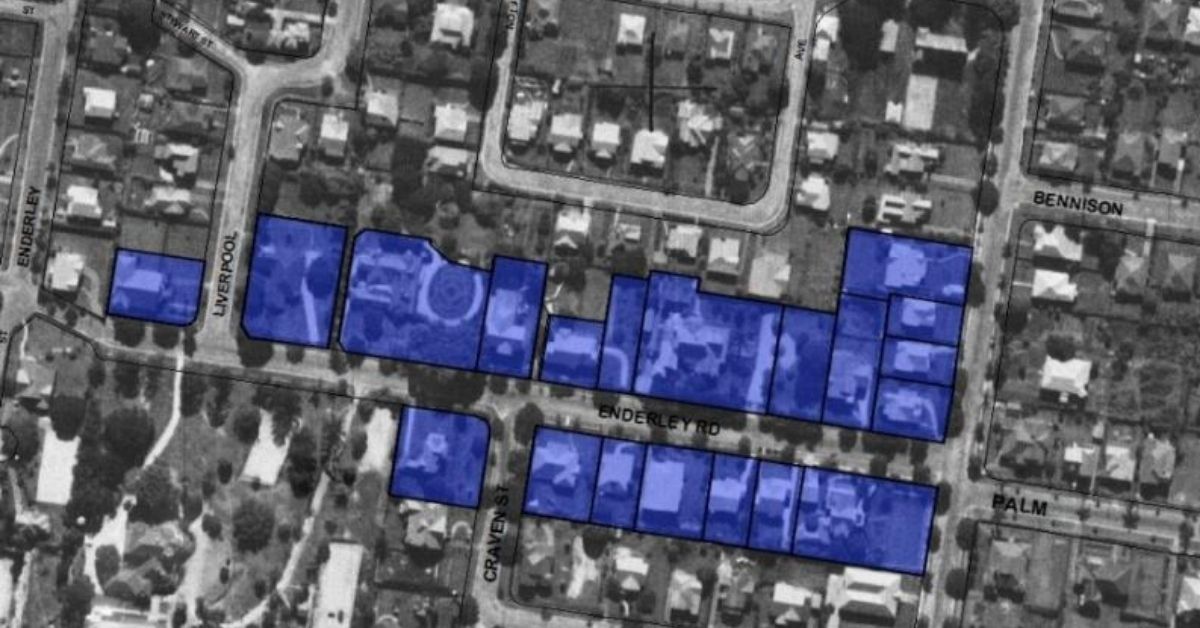 The Enderley Road heritage precinct in Clayfield has heritage homes that epitomise the alluring and enduring characteristics of well-designed houses from the 1890s to the 1930s. Did you know that the area was once a pineapple farm? Here’s a look back on how one of Clayfield’s best streets metamorphosed into the neighbourhood of choice of some of Brisbane’s most influential people over the years.

Development started in Enderley Road upon its purchase by Deed of Grant around the 1850s. Properties were subdivided and sold for farming pineapple and producing dairy, or as a semi-rural retreat for privileged families.

One of the first grand houses to be built on Enderley Road was Stanley Hall in the 1880s for produce dealer John William Forth, who had 10 children with his wife Selina. The Forths, however, lived in the house for a short period only following the death of one of their daughters and Mr Forth.

The mansion was turned over to Herbert Hunter, a family friend, pastoralist, grazier, and horse racing enthusiast. Stanley Hall appealed to him not only because of the house’s architecture but for its proximity to the racecourse at Eagle Farm. Mr Hunter did subsequent redevelopments to the house but he eventually sold the property to pastoralist and racehorse owner Edward Goddard Blume in 1910.

Mr Blume subdivided most of Stanley Hall, with 4.5 acres going to the Order of the Sisters of the Presentation. The sisters built the St. Rita’s Convent on the land in 1926. Nearly a decade later, the sisters expanded and built a school that has thrived until today.

Ralahyne on 40 Enderley Road was built in 1888 for Robert Gray, then the colonial secretary, by architect George HM Addison. Mr Gray, who became the Commissioner of Railways,  lived in the house until his death in 1902.

The home changed owners several times following the death of the public figure until Henrietta Watson bought the house in the 1920s. Ralahyne remained with the Watson family until 1985, when it was bought by private owners.

Ralahyne is also in the Queensland Government’s Heritage Listing.

The Lynton house on 58 Enderley Road, constructed in 1918 for Gilbert Lees, covered three-quarters of an acre of the Ralahyne property. This land was further subdivided into blocks of houses in the 1950s.

Aside from Stanley Hall and Ralahyne, three other properties stood out in Enderley Road in the early 1900s:  Huntington, Fortland, and Stanwraith but only the latter remained in the modern times. Stanwraith, constructed in 1901 on 32 Enderley Road, was the home of architect Montague Talbot Stanley, the son-in-law of Sir Thomas McIlwraith, a former Queensland premier.

By the 1920s, another wave of development washed over Enderley Road with Interwar houses like the Girrawheen, the Breffney, the Linstarfield, and its neighbouring houses.

The Breffney on 83 Enderley Road was owned by Mr and Mrs Hendry Drew. The Spanish Mission house was designed by prestigious Brisbane architects Hall and Prentice. It had a tennis court, a pool, a stucco garage, and heaps of tropical plantings.

Girrawheen on 71 Enderley Road was built in 1923 for insurance manager James Milne and his wife Edna. This property was subdivided from Mr Blume’s land that surrounded Stanley Hall. The Milne family lived in Girrawheen until the 1950s.

In 1956, Sir Walter Campbell, a distinguished lawyer who went on to become the Chief Justice of Queensland and the Governor of Queensland, lived in Girrawheen with his family for three decades. The house went through many alterations during this period but the redevelopments generally retained the character of the Interwar home.

The Linstarfield on 64 Enderley Road is a Federation-style timber villa built for mine owner PD Rylance, whose son, Mervyn Rylance, grew up to become a prominent Brisbane architect. A few years later, the house also became the home of another wealthy mine owner, HG Noble, an active figure in Brisbane’s business and society gatherings.

Some alterations and demolition were done to the house through the years and into the modern period, whilst still maintaining its elegant and very recognisable architectural features.

Mr Noble’s wife, Agnes, purchased the neighbouring lots around Linstarfield that became vital to the heritage-listed precinct. During World War II, the grounds of the Linstarfield were used as a private air-raid shelter and were further subdivided as a family lot.

Beside the Linstarfield is a modern house on 72 Enderley Road. The home is technically not part of the heritage precinct though its development has to be regulated by the Heritage Code.

Also on the former Linstarfield lot is the home on 82 Enderley Road, a house with a terracotta tiled roof. It was built for Mr and Mrs James Ernest Stewart.

Camara, Delcotta, and Fetlar were also built in the 1920s and are considered integral properties to the Enderley Road Heritage Precinct.

Camara, on 24 Enderley Road, is a timber house with a curved front verandah and was originally built for a draper, Cecil Bowerman.  Delcotta, on 19 Craven Street (formerly 51 Enderley Road), is a stylish Tudor home designed by influential Brisbane architect EP Trewern for the dentist A. Ure McNaught and his wife. Fetlar, on 57 Enderley Road, was constructed in 1923 for wool expert Mr Richard Baxter. The house stands out as a California bungalow.

The Enderley Road Heritage Precinct was entered into the local heritage listing in 2011.

Today, Clayfield is a highly desirable suburb with generously sized properties in a neighbourhood that has an appealing family vibe and plenty of lifestyle amenities within easy reach. Local providores know people by name. Highly rated schools abound and areas like the Enderley Road Heritage Precinct provide a unique heritage appeal that gives people an enduring connection to the suburb’s roots.