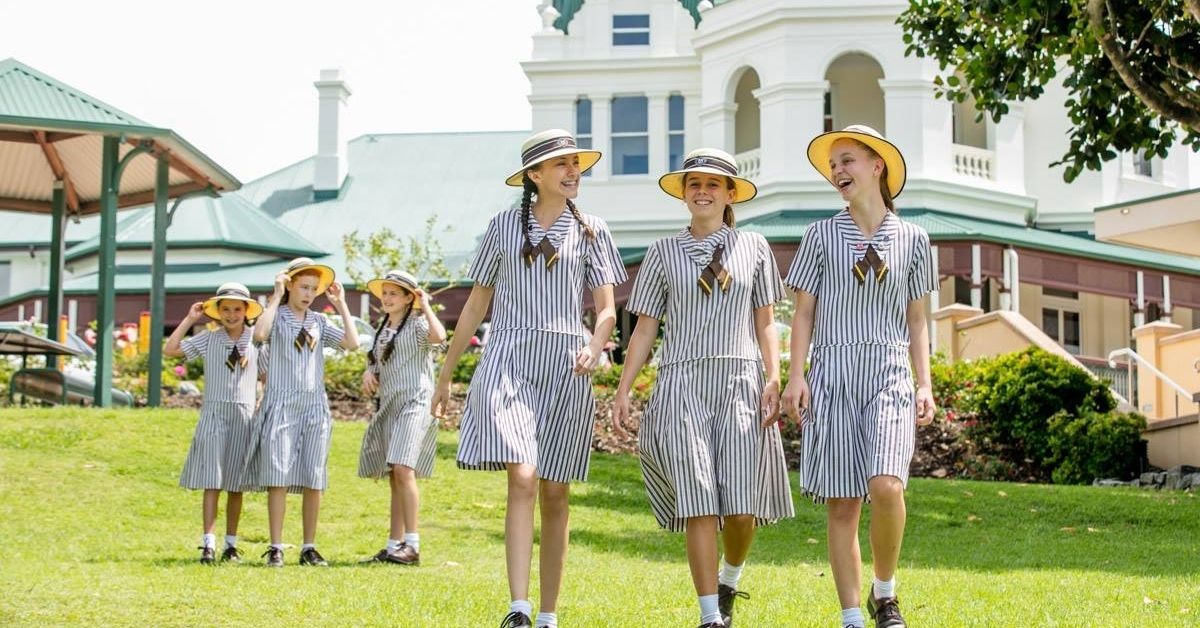 St Rita’s College, an independent Catholic secondary school for girls, was established by the Presentation Sisters in 1926. Do you know where the school got its name from, and where and how it began?

The story goes that St. Rita’s College was named after Sister Rita, a member of their order. Others say the school was named after the saint of hopeless causes, St Rita of Cascia. Apparently, the Presentation Sisters were in a bit of a predicament as they had quite a debt to clear just to establish the school in Clayfield.

St Rita’s College was established in a prominent Clayfield residence known as Stanley Hall. Stanley Hall was originally built for Herbert Hunter in 1888 but it became the property of Edward Blume and his family from 1911 to 1926.

Mother Alice Ursula Kennedy and Mother Mary Patrick Madden negotiated with Mr Blume, whose family was planning to move out of Stanley Hall, for the five-acre property. The sisters secured a bank loan worth £22,000 with Mr Fred Martin, the brother of Sister Rita Martin, as the guarantor.

Stanley Hall was an answered prayer for the Presentation Sisters who were still living at the presbytery of St. Agatha’s parish school a few meters away. Despite their debt, the sisters managed to make interior changes at Stanley Hall to prepare the site for primary school students.

The first classroom welcomed students in a humble heritage room with only 14 kids between six to 15 years old. The school still lacked amenities on account of the cash-strapped sisters.

In 1927, the Department of Public Instruction granted St Rita’s College approval as a Queensland secondary school. But the Great Depression followed thus no additional facilities were built due to lack of funding. According to the Convent Annals, the Presentation Sisters were considering selling Stanley Hall and downsizing.

However, in spite of the bad state of the economy at that time, the school community thrived and secured years of new enrollees with the opening of the kindergarten department.

In 1938, the Kennedy Centre was built, which was named after Mother Alice, who was also the first principal of St Rita’s. The school also offered boarders and day boarding for its secondary students.

During World War II in 1941, the sisters and the boarders had to be evacuated to a convent in Murgon miles away from Clayfield. Upon the reopening of St Rita’s in 1943, subjects like Science, Music, Art, and Drama were introduced and have remained a major part of the school’s curriculum.

By the 1950s, St Rita’s was flourishing as a school offering high academic standards and a noteworthy music and drama department where the creative students were encouraged to pursue their dreams. In the 1960s, the school added the Sacred Heart Centre with more classrooms as well as the art physics centre.

In the 1970s, the school scrapped the boarding facilities and built the Nano Nagle Centre with four science laboratories. It was named after the Irish pioneering founder of the Sisters of the Presentation of the Blessed Virgin Mary in the 1700s.

The centre underwent a massive renovation in 2011 with the addition of more science laboratories, Information Technology network and support centre, function rooms, modern teaching rooms, a state-of-the-art resource centre, and a panoramic view of the northern bay suburbs.

The laboratory sections of the Nano Nagle Centre were renamed the Sister Elvera Sesta Science Centre, a former principal who was a science degree holder from the University of Queensland

Subsequent rebuilds of St Rita’s College also took place for the next five decades to include the following:

Today, the original Stanley Hall building serves as the school administration area. St Rita’s College maintains its reputation as highly-regarded as a Catholic independent girls school for Years 5 to 12 girls with more than 1,000 enrolments a year.

St Rita has proudly produced thousands of well-educated women who were encouraged to achieve their full potential. Some of the school’s most distinguished alums are  Julieanne Alroe, the CEO of Brisbane Airport, Chair of Infrastructure Australia, Eloise Amberger, an Olympian for Synchronised Swimming, Abbie Chatfield, a social media celebrity, Sophie Conway, Australian Rules Footballer with Brisbane Lions, Kate McCarthy, a sportsperson with Queensland Cricket and Brisbane Lions, and Georgia Prestwidge of the Brisbane Heat Cricket Team.

In 2021, nine students from St Rita’s College scored an ATAR of 99+, which means they are among the top 1% of the state.